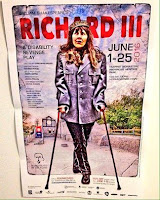 Shakespeare In The Ruins, Unit Y 300-393 Portage Avenue,
Winnipeg, Manitoba R3B 3H6
Tickets or call 204-942-5483
Wednesday performances are 'pay what you will'
Winnipeg Transit - Handi Transit has extended their service to the Ruins for the entire run!

Richard III starring Debbie Patterson
We provide chairs and you follow from scene to scene.

Richard will be played by Debbie Patterson, an artist with MS whose real life struggle will lend her a unique insight into Richard’s own struggles.

What do you do when you’re born disabled and your mother hates you for it? When your brothers see you as only good for menial tasks despite your obvious sensitivity and intelligence? When you’ve fought through 18 years of a bloody civil war? What do you do when your brother finally becomes king? You turn your gaze to the family and the culture that taught you to crush your conscience and abandon your humanity, and you show it just what it is to suffer.

We’re examining Richard as an evil that’s been created by the twisted gaze of those who look at his body. As the play progresses, his disability becomes contagious – he damages or destroys everyone who stands in his way. By the end, he is surrounded by a chorus of the damaged and the dead.

Grand Opening Celebration
We're finally ready for a party at our new digs! Come for 3 days of celebration.
The critters want to show off their new home, and we want to help them do it.

BARBECUE | BAKE SALE | PRIZE DRAWS | SITE TOURS
Cindy's been baking, and there will be a selection of her gourmet cupcakes!

****
Jenn's Furry Friends Rescue is a registered and incorporated non-profit organization. Started in 2012 to help rescue dogs, cats, and other furry creatures, it is run by a passionate volunteer base dedicated to helping unwanted and homeless animals get connected with their forever families. As we do not have a "bricks and mortar" building the way some shelters do, we rely on the assistance of animal lovers in the Winnipeg area to provide temporary housing for these animals.

We are always looking for fosters to provide loving temporary homes for our rescues. If you are interested in becoming a foster parent, please fill out an application or email.

We have been in an intake freeze for a couple of months now due to growing vet bills. While I'd like to say they are slowly going down, I can't. Rusty is still baffling the vets with his anemia and odd blood work. Scamp is being treated for mange and Mindy is about to begin her heartworm treatment. We desperately need help. Thank you ~ Jenn and team

The series is offered free to the public. This year’s schedule features more than 30 events!

Canada Day Celebrations!
This is our second year of this family event.
Some favourites are back: the bouncers, the dunk tank, the games on the fields, and face painters. We have added some great new stuff as well.
From Games2U we have 4 giant hamster balls; also the Video Gaming truck, cotton candy, shaved ice cones, and the BBQ, with pulled pork on a bun as well!
The music will be going all day, with demonstrations from our dance team, as well as award winning Rose Pointe Dance Company, and our mixed martial arts group.
We will have a great Silent Auction Prize as well! Boston Pizza will be here as well as their mascot, Lionel.
The nights finale will be ArchAngel fireworks!
Posted by Margaret Ullrich at 8:32 PM