Daniel McIntyre/St. Mathews Community Association and local contractor Custom Cut Corners team up to bring you another series of hands-on workshops that will save you time and money.
January 15 - Introduction to Plumbing
January 22 - Basic Drywall Repair
January 29 - Building Envelope and Insulation
February 5 - Research the history of your house
February 12 - Introduction to Flooring
February 19 - Introduction to Electrical
February 26 - Building a Fence
*

We are a Call2Recycle drop off and accept household batteries, single-use batteries and old mobiles. (NO other electronic waste, please.)
The drop-off box is in our resource centre. For more information on what can be recycled:
https://www.call2recycle.ca/what-can-i-recycle/

SNÖFEST WINTER FUN
A winter celebration with singing and dancing to the music
by the Drifters from Lac du Bonnet and the Ice Queens of the North.
Ice bar, candle lit northern hall, and light flat bread lunch.

****
Divine Clarity, 2071 Portage Avenue, Winnipeg, Manitoba R3J 0K9
Register for Basic and Advanced Crystal Therapy and save $15!
A non-refundable deposit of $50 is required at time of registration.
Balance is due at the start of the workshop.

Snotty Nose Rez Kids are a hip-hop duo from the Haisla Nation. Zazaxsmalis, known as Yung Trybez, is a writer, rapper, photographer and spoken word artist. Wa’tla’ka, known as Young D or D, is a songwriter/rapper who was born and raised in Kitamaat Village.
Together they are the Snotty Nose Rez Kids. https://snottynoserezkids.com/

Malcolm-Jay is an award-nominated hip-hop artist who has performed his socially conscious and self-reflective writing around the world for nearly a decade. His energy, honesty and passion permeate his music. http://malcolmjay.com/

A Hyped Conquest is a collective showcase from the young artists of Studio 393, an arts youth drop-in located in Portage Place and a satellite of Graffiti Art Programming. https://www.graffitigallery.ca/studio-393/

The concert visits 10 countries, reimagining their traditional folk songs within the linguistics of the Jazz dialect. Accompanied by Andrew Littleford on trumpet, Will Bonness on piano, John Baron on bass, and Kevin Waters on drums, this promises to be an exciting trip.

Painter Alexandra Hasenpflug has appeared as a guest on the renowned TEDTalks series. Alexandra will be painting throughout the concert.
A collection of her original works available for purchase.

Canzona's 30th Anniversary Gala
Founded in 1989 by Henry Engbrecht and a group of enthusiastic young singers, Canzona has performed major works of the Baroque at the highest level for thousands of audiences. Come celebrate the past, present and future of Canzona with some old and new music for choir and Baroque instruments!
*
February 7, 6:30 PM – 10:55 PM
Tickets

Dan Mangan is a two-time JUNO award-winning & two-time Polaris Music Prize listed musician and songwriter. Dan’s 5th full length More or Less, an album about witnessing birth, and in some ways rebirth, and features singles “Troubled Mind”, “Fool For Waiting” and “Just Fear”. In 2017, Mangan co-founded Side Door, an online platform that connects hosts with artists for intimate performances in unique spaces.

We Ain’t Terrorists is a live stand-up comedy show inspired by the real-life experiences of comedians Dave Merheje and Ali Hassan (Lebanese-Christian and Pakistani-Muslim, respectively) who explore the stereotypes, misconceptions, and misunderstandings that they regularly face, inside and outside of their own communities.
We Ain’t Terrorists is also a socially poignant show that strives to counter the tide of prejudice that exists in this country and globally... all the while spreading the love, relateability and laughter!

Ali Hassan is a stand-up comedian, actor, and writer. He honed his solo show, Muslim Interrupted, at the Edinburgh Fringe Festival in 2016. He has performed in 16 Canadian cities, including at the Just for Laughs festival in Montreal.
Ali is also the host of Laugh Out Loud (CBC Radio One, SiriusXM), and a frequent guest-host of q, the leading arts and culture program in Canada, and the host of CBC’s battle of the books, Canada Reads.  www.standupali.com

Dave Merheje has won the Just For Laughs ‘Homegrown Comic Competition’ and NOW Magazine's ‘Best of Toronto Award’ for Best Male Stand-up. Dave has taken his act across the world. He was a regular contributor on MTV Live and recently joined the cast of Mr. D on CBC. Dave also just released his own live comedy special Bad Grammar, Good Friend. www.davemerheje.com
*
February 6, Doors 6:30 pm / Show 7:30 PM – 9:30 PM
Tickets $30 plus fees in advance, or $40 at the door

February 1, 8 PM – 11 PM
Tickets at the WECC Box Office, online, or at both Into The Music Locations

Don Ross has toured since 1989, and has played with symphony orchestras in Canada and Germany. He composes scores, and does production and recording engineering. Don plays acoustic guitar, electric guitar, slide dobro and lapsteel guitar, harp guitar, piano, keyboards, bass guitar and drums.

Calum Graham plays both the Acoustic as well as the Harp Guitars. His music embraces elements of folk, world, and blues. Graham just recently released his fifth studio album 'Tabula Rasa’, which introduces his soulful vocals to his audience.
*
February 3, 2 PM – 4 PM
This workshop is free of charge and open to all ages!
To sign up or for information, email community@wecc.ca, or call (204)783-6918

Songwriting with Keri Latimer
With her alt-folk group Leaf Rapids and previous band Nathan, Keri has been touring internationally for 15 years. She plays the theremin and scores music for film.

Career highlights include solo performances with the WSO. She has contributed music for films including the Academy Award nominated feature film Frozen River by Courtney Hunt.
*
February 8, 2019 at 8 PM – 11 PM
$25 @ the door / $20 at the WECC box office, both Into The Music locations, online

Thoughtful lyrics and charming performances have earned Danny Michel a devoted fan base, nominations for three Juno awards, The Polaris Prize, and The CBC’s "Heart Of Gold", and most recently winning the CFMA's "Producer of the year" and "Oliver Schroer Pushing the Boundries" Awards.
*
February 10, 11 AM – 4 PM

Forthwith Festival 2019 - We will present an eclectic and bold selection of visual artists and live acts ranging from Industrial Techno to experimental sets with DIY electronics. Concerts, workshops and installations will be hosted at Forth, Videopool Media Arts Centre and at new and adventurous places across Winnipeg.    www.forthwithfestival.ca 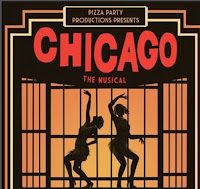 Fame Nightclub and Pizza Party Productions Present Chicago
The roaring twenties in Chicago, two vaudeville murderesses, Roxie Hart and Velma Kelly, are locked up in Cook County Jail and find themselves on death row together fighting for fame, fortune, and acquittal.
In a period where jazz is everything, come experience our own Chicago Jazz Club and have our incredible cast Razzle Dazzle you.

Paddling Drop In - Course #6809
Join us for a fun night of paddling! Play, work on skills and even try some new skills.
A limited number of kayaks are available, but you can bring your own boat.
lease ensure your boat is completely clean.

Beat the Cold Winter Triathlon
for people experiencing homelessness on the coldest nights of winter.
A 5 km run, 5 km bike and a 5 km skate along the river trail.
Race all three sports solo or find two friends and enter as a relay team.
Your participation will help support 1JustCity’s overnight emergency warming centre, Just a Warm Sleep which invites up to 25 homeless people into Oak Table to get a safe warm sleep every night from January through March.
Create a pledge page individually or as a team (max 10/team) at the bottom of the registration page. Prizes will be awarded!

**
Main Street Project Inc. is playing host to the Coldest Night of the Year fundraising event.
On February 23, we will be walking and raising funds to help create a new and critically needed shelter space in our city, and we need your help!
To be a part of this event, please click on the link: https://cnoy.org/location/winnipeg