Named Canada’s “most creative” rapper by the National Post, Cadence Weapon has consistently exhibited a passion to take rap into new and unexpected directions.

His self-produced debut album, Breaking Kayfabe, was released in December 2005, met with international critical acclaim and was shortlisted for the inaugural Polaris Music Prize. After the release of his 2008 album, Afterparty Babies his appointment in 2009 as Poet Laureate of Edmonton, and 2012’s Hope in Dirt City, Cadence is back with a new self-titled album that expands his stylistic range by incorporating elements of trap, funk, electro, techno and grime.  http://www.cadenceweaponmusic.com/

Air Saxophone Competition hosted by Gorilla Mask
Bring your honk, your dance moves, your who-can-it-be-nows and born-to-runs, your stretchy jeans, your most slaying-est struts. The winner will go down in local lore!

Ground-shaking grooves, hammering rhythms, and wailing melodies layered with explosive no-holds-barred improvisations, Berlin's Gorilla Mask is a type of sonic madness roaring with a restless, implacable energy. They craft spirals of sound in four or five dimensions, the ebb and flow of an acutely aware trio of musicians.


Their new album, I Can Feel You Creep Into My Private Life, is an unflinching examination of modern identity, built on Merril Garbus' recent foray into DJing and inspired in part by C.L.A.W. (Collaborative Legions of Artful Womxn), her radio show highlighting female-identifying producers. While the album was written prior to the 2016 presidential election, it’s not difficult to hear hints of political anxiety throughout the record.

To celebrate Uli Jon Roth is performing a whole series of concerts and tours worldwide with varying programmes. His two-month triple anniversary North American Tour will be devoted to performing a complete set of Songs from Uli’s ground breaking Electric Sun period.
Electric Sun Reborn will consist of an intense 90-minute set by Uli and his band, complemented by multi-media projections. This is followed by an intermission and a shorter set of the highlights from Tokyo Tapes Revisited to round off the 3-hour extravaganza.

Uli has not performed the bulk of this music for over 30 years. Electric Sun was far more than just a cult band and had a sizeable following on both sides of the Atlantic as well as in Japan. Thanks to Uli’s innovative and ground-breaking guitar playing and interesting compositions the band presents a unique blend between Beethoven and Hendrix.

Vancouver Island-based pianist/producer Michael Kaeshammer is a piano virtuoso with a technical mastery of many different styles, an eloquent singer/songwriter, and a charming and engaging performer.

Sebastian Bach, the Canadian heavy metal / rock vocalist famously know for his mainstream success as the frontman of legendary rock group SKID ROW from 1987 to 1996, returns to his home country of Canada for an unforgettable night of Rock'n Roll!

It’s music for the heart, head, and feet and saw their album, v2.0, named a Mercury Prize Album of the Year 2014. In 2016 they released the album Man Made Object and more recently they have been touring their own score to Godfrey Reggio’s cult film, Koyaanisqatsi. Their new album, A Humdrum Star, was released this past February.

Guillaume Perret is a jazz saxophonist, keyboard player, and composer from Annecy, France. Perret, along with Jim Grandcamp, Philippe Bussonnet, and Yoann Serra, make up Guillaume Perret and the Electric Epic, a contemporary avant-fusion Zeuhl super-group who have released four albums, the most recent being 2014’s Open Me. Perret’s solo album, Free, was released in 2016.

****
June 24 at 8 AM - 1 PM
Lyric Theatre at Assiniboine Park, Winnipeg, Manitoba
$10 per person  Register now: https://www.whspawsinmotion.ca/
When you register, you are entered to win a $250 Visa gift card!

Walk & celebrate pets with us at Winnipeg Humane Society's Paws in Motion, presented by Fairmont Winnipeg! It is Manitoba's largest celebration of pets. Over 1,000 people and their pets will gather for this fun day in the Park in support of animals in need.
You do not need a pet to participate. All leashed pets are welcome!
All funds raised by participants who choose to fundraise help over 8,000 animals the WHS rescues and rehabilitates each year.

Jim's Vintage Garage Museum is on site
Free admission to Museum - donations are accepted
There will be a Silent Auction and a 50/50 Draw. Best in Show Awards for Oldsmobile, Mopar, Ford, and GM, Special Interest, Plus Dads Choice! Gift bags and dash plaques for the first 50 cars. Food, Drinks, and Music. Come out and enjoy a good time for all!
CONTACT  Colin Gow: 204-981-5019 email: ccig14@hotmail.com
David Lenton: 204-795-5050 email: dlenton@mymts.net

Join us for another edition of Drag Queen Gayrotic Bingo!
The classic game with colourful numbered balls and FABULOUS drag queens!
Kinky prizes, Bingo, & plenty of debauchery makes the evening fun and entertaining!
The kitchen is open from 5PM - 9PM with bingo starting at 9PM!

July 1 - Canada Day
Enjoy a slice of Canada Day Cake at 2 p.m., and have your cheek painted.
Explore the marsh from a horse-drawn wagon from 12:30 to 3:30 p.m.
Go on a guided canoe adventure or rent your own canoe ($15 per 45 minutes).
$3 for members and $6 for non-members for rides
*
July 7 - 10 a.m. - BYOC! Bring:
your own canoe, kayak or stand-up paddle board
Transport Canada approved safety equipment: bailer, whistle, lifejacket, throw rope
drinking water, water bottle, hat and sunscreen: there is no shade
wear footwear that can get wet
Pre-registration required. $12 for members and $20 for non-members
*
July 15 - 10 a.m. - Wild Edibles Workshop
Discover the culinary potential of some of the common plants of the marsh.
Pre-registration is required for this 2 hour workshop.
Workshop fee: $18 for members, $26 for non-members
*
July 21 and 22 - Dragonfly Festival
Join us for a dragonfly safari, make some dragonfly art, and catch a dragonfly nymph.
*
July 25 - 12 to 2 p.m. - Picnic at the Main Mound
Celebrate 25 years with us!
Includes bag lunch and kids games.
Pre-registration required.  $10 members, $18 non-members
*
July 28 - 1 p.m. - Birding Hour - Wetland Invasive Species
Discuss the many invaders that now appears in wetlands.
Pre-registration is required.
Oak Hammock members $6, non-members $14
*
July and August, 9 a.m. to 4 p.m. daily
Summer Camps for Kids, a variety of week-long camps for kids, ages 6 to 9.
Camp fees are $135 for members or $165 for non-members (taxes included).

YPM Yoga Teacher Training - this Yoga Alliance of Canada recognized 200 hr level yoga teacher training course will give you the knowledge, skills and transformative experience to take you deeper into your practice and allow you to become an amazing teacher.

You can stay rooted in your normal life while taking this journey inward. You will be challenged to grow as a person, as a yogi and as a teacher. You will flourish in an intimate setting surrounded by love and support to take you further than you imagined possible.
For more info or to apply visit www.yogapilatesmore.com/teachertraining

2018 Winnipeg Folk Fest
Hear over 70 artists from around the world on nine stages. Celebrating people and music immersed in nature for 45 years! Tickets on sale now, payment plans available. 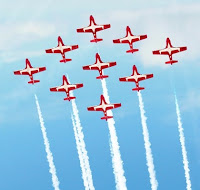 Southport and KF Aerospace are partnering to bring the 2018 Manitoba Airshow to the Southport Airport, 3 km south of Portage la Prairie, 70 km west of Winnipeg on the Trans-Canada highway.

The CF Snowbirds, a Canadian icon, upholds the legacy of military aviation excellence with their incredible performance. The schedule is jam-packed with high-powered performances and intricate aerobatics acts. Aerial performances, static aircraft displays and ground-level entertainment that is suitable for all ages.

Displays, live music, kids zone and sports zone for a full family-friendly experience.
Guest Services and food vendors ensure your experience will be unforgettable.
*
July 7 at 1 PM to Jul 8 at 4 PM
Anna Sky Dancer at Manitoba Airshow
Posted by Margaret Ullrich at 8:01 AM