DMSMCA presents West Central Historic Walking Tours
Find out about the history of our neighbourhood through this series of FREE, guided walking tours starting at 7:00 pm. Led by author and historian Christian Cassidy.
For more information, contact Christian at housing@dmsmca.ca or 204-774-7005 ext. 102

Do you have art you are not using?
Art donations accepted until September 1.
Phone 204-599-8787 or email gnmAFTA@gmail.com


During Folklorama’s second week (August 12-18), we will have a display table at the Africa Pavilion located at the Holy Cross Gym, 290 Dubuc Street.

Although Grands ‘n’ More Winnipeg is part of a campaign focused on grandmothers and their orphaned grandchildren in sub-Saharan Africa, we have been open to anyone. We are delighted to have attracted, not only grandmothers in our city, but also men and women who are not grandparents and who share our concern.

Heritage Day - Did you know our annual Heritage Day is a tradition that goes back to the 1970s? Families come to the museum to learn about our history. Come make your own memories and learn about the past.
We are also still seeking volunteers. Contact us at info@cchm.ca or call (204) 444-4448

EQC Gravel Grinder - This will be an 80 km gravel ride with several segments throughout that will be timed using strava segments. It will be a group ride with some competitive sections. Come enjoy some of the best gravel riding in the province.

**
Check out CarverKings Paul and Jacob Frenette and several other carvers creating some spectacular works of art. Carvings will be up for auction as well. Kid Friendly
Check it out as these huge logs are transformed from imagination to reality!

Manitoba Underdogs Rescue is hosting an inaugural charity golf tournament in St-Pierre-Jolys (25 minutes south of Winnipeg off of Highway 59). This tournament will be an 18 hole, Texas Scramble, shotgun start, tournament, with a maximum of 144 players.
There will also be a fantastic silent auction!
Presenting Sponsor: Wooftopia Dog Training & Recreation Centre
Registration: 10:00AM / Shotgun Start: noon / Dinner: 5:00PM (approx)

Swamp Donkey Adventure Race - “The Moose is Loose” at Canada’s largest adventure race. Teams of three paddle, bike and navigate using map and compass in the breathtaking Manitoba wilderness.
This is a non-stop 6-9 hour event that tests the skills and physical abilities of teams. Disciplines include: mountain biking, canoeing, trekking, navigation, teamwork and special tasks. No special training required, just a will to finish. A spectacular awards ceremony, the legendary post race party and a meal fit for a Swamp Donkey will be waiting for the racers.

Kelly Morton Photography: http://www.youtube.com/watch?v=vHHVMlsv0WU
If you have any racing questions, please contact rick@swampdonkeyar.com

September 15 at 8 AM - 6:10 PM
10 hour Moose Knuckles Adventure Race including Mountain biking, canoeing, trekking and orienteering.
*
September 16 at 11 AM - 4 PM
Dust N' Dirt 100 - Get dusty and dirty riding 100km of gravel. Stick around after for post ride chatter, food, and extras on the patio at the Wig Wam (Weather Permitting)
Bathrooms available beside the parking lot. Park pass is required for parking.

The Art of Managing Your Career Fall 2018
The course explores the attitudes and behaviours that may make it difficult for artists to recognize their transferable skills. It then builds components of a business plan and other self-promotion tools. A peer learning network will be established. Course participants will be expected to:
- Participate in group activities, complete assignments and participate in the peer learning network and in program evaluation sessions.
- Organize and participate in a First Fridays in the Exchange event.

Heather Bishop, CM, OM, Hon. LL.D, is a musician/singer-songwriter, social activist, keynote speaker, visual artist, published author, teacher, and tradeswoman. She has been awarded the Order of Canada, the Order of Manitoba, and an Honourary Doctorate of Laws.

Goruck Light Challenge - Winnipeg
Honour and remember those we lost on 9/11 and in the ensuing years of combat.
Light does not equal easy, but it does equal FUN. Led by Special Forces Cadre, cover 7-10 miles in 4-5 hours and earn your first (or 50th) GORUCK patch.
Download a printable flyer here: http://ruck.ly/1TQf2GQ

The Handsome Daughter, Winnipeg, Manitoba R3C 2B2
Accessibility/policies: https://reallovewpg.com/accessibility-and-policies/
NO racism NO sexism NO homophobia NO transphobia NO ableism

Hugo Manuel has been releasing music under the name Chad Valley since 2010. Manuel released his third full-length album in May, following his sophomore album, Entirely New Blue which saw him traverse the world touring his impressive one-man show. Young Hunger, Chad Valley’s first full-length album in 2012, with an a-list of collaborations from Twin Shadow, Totally Enormous Extinct Dinosaurs and Glasser, caught the attention of mainstream indie media. Then came the blockbuster movie Warm Bodies, which featured his song Shell Suite.
*
September 14, Doors at 9 PM, music 10 PM - 1:30 AM
$15 at the door, $12 in advance

Eye And Ear Control presents Begrime Exemious, returning from Edmonton in another mission into the theatre of war, bringing blackened pain and destruction! With local support from
Flash Out (Winnipeg crossover thrashgrind)
Co (ex-Wolbachia, ex-HHC, ex and current BTILC and Zero Cause members. First show)
Featuring distro by EAEC.

Get in on the roller derby action with the Winnipeg Roller Derby League's FUNraiser game. All donations will go to programming at the North Point Douglas Women's Centre.
This fast and fun game will feature crowd buy-in options that let you help your favourite team win... and sabotage their opponents! Want to give a player a penalty? Make a donation. Want to swap the scores at halftime? Make a donation!
We'll even be open to suggestions...at the right cost.

Synonym Art Consultation’s First Friday After Party, in conjunction with our 2018 The Tallest Poppy Residency Program

We are excited to announce the 2018 DJs In Residence: DJ AOKS and DJ ZUKI!
Indigenous Contemporary Art Curator Niki Little will be curating an exhibition in collaboration with Wall-to-Wall Mural and Culture Festival on the topic of Collectivity.

Synonym First Friday After Party was created in an effort to encourage the public to engage in art openings across different neighbourhoods in the city and provide a gathering point in an inclusive space to celebrate our local art scene. Liquid gold provided by the Synonym First Friday Beer Sponsor, Barn Hammer Brewing Company.

December 7 - Synonym Art Consultation will hit the reset button with an OPEN CALL FOR SUBMISSIONS and of course – a celebration of our 2018 successes!

Sept 7, 8 and 9, starting at 11:00 AM
We are excited to celebrate Downtown Winnipeg's largest festival: ManyFest: All together downtown. Manyfest will see an anticipated 75,000-plus people celebrating on Broadway. Manyfest is presented by title sponsor Manitoba Liquor & Lotteries.

Electric Donkey Glow Run/ Walk - "You're GLOWING To Love It"!!
Glow Run/Walk/Dance Party - Swamp Donkey Adventure Racing & ManyFest Downtown Festival bring you the time of your life!
Run it, Walk it, FUN it and Dance your cares away!! Grab your friends & dress up or glow from head to toe. Go immerse yourself in an experience that's part Run, mixed with the best DJ's, Music and Lights!
5 PARTY ZONES along the amazing downtown Winnipeg route. The FUN gets underway at 6pm then starting at DUSK 1000's will enjoy the run followed by a DANCE PARTY at ManyFest Downtown Street Festival! Participants get glow kit, complimentary beverage & the most FUN Run at Night!

Art Ride: Night Lights, a nighttime tour with Bike Winnipeg, which will take us through public artworks that light up the night, including:
- emptyful
- Indigenous Artists' Project at Air Canada Park
- DIY Field
- YOU YOU + YOU
- Light Through
- From Here Until Now
- heaven between
This tour will end at the site of Manyfest. 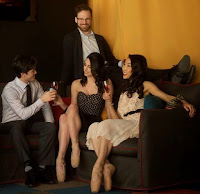 Barre After Hours 2018 - Celebrate the art of dance with Royal Winnipeg Ballet company dancers in an event planned for you, by them! Dance the night away downtown to local favourites The Dirty Catfish Brass Band, enjoy signature cocktails, delicious appetizers and desserts, Aveda Institute’s pop-up beauty boutique, craft liquor tastings, a ballet ticket giveaway, and much more!

This annual event invites the community to meet, mingle, and share a dance or two with your favourite dancers from the Royal Winnipeg Ballet.
Get your dancing shoes ready for the end-of-summer party that can’t be missed!

Design Canada - Director: Greg Durrell - Canada, 2018, 76 minutes
A documentary film that follows the transformation of a nation from a colonial outpost to a vibrant and multicultural society, through the lens of graphic design.
**

The Human Scale questions our assumptions about modernity. For 40 years the Danish architect Jan Gehl has systematically studied human behaviour in cities, in what he called Life Between Buildings. What made it exist? When was it destroyed? How could it be brought back?Gehl also uses statistics: How many are pedestrians? Is this street performing well for all? Jan Gehl who will be in Winnipeg on September 19.
**
September 29, 6 pm to late
Container at Old Market Square, next to 492 Main Street

Join us for an exhibit on container architecture, in Winnipeg and beyond.
This exhibit is offered as part of Nuit Blanche 2018 http://nuitblanchewinnipeg.ca
**
October 9, 7 pm
Rady Centre, 123 Doncaster
Admission free


The Manitoba premiere of RAMS, directed by Gary Hustwit, with music by Brian Eno.
Dieter Rams has left an indelible mark on the field of product design and the world at large with his iconic work at Braun and Vitsoe. The objects Dieter has designed have touched the lives of millions. So many of us have had a Braun coffeemaker, shaver, stereo, calculator, speakers, or alarm clock. Or an Oral-B toothbrush.
Posted by Margaret Ullrich at 1:47 PM