March 22, 7 PM – 8:45 PM
Knox United Church, 400 Edmonton St, Winnipeg, Manitoba
Admission is by Donation.  We can issue tax receipts as we are a registered charity.
Can't make a donation?  Don't let that stop you!  We still want YOU there!

MRG Concerts Presents: The Musical Box: A Genesis Extravaganza
An unprecedented musical feast of 1970-1977 favourites and rarities! In an all out performance of live visual signature stunts, a museum-worthy array of vintage instruments and a dizzying pace of iconic tracks and stage rarities, THE MUSICAL BOX indulges for the first time in its 25 year existence in an intense trip into the world of early GENESIS.

From its unique perspective as the only band ever licensed and supported by GENESIS and PETER GABRIEL, TMB presents a new show featuring the music of TRESPASS, NURSERY CRYME, FOXTROT, SELLING ENGLAND BY THE POUND, THE LAMB LIES DOWN ON BROADWAY, A TRICK OF THE TAIL and WIND & WUTHERING.

Uli discovered his love for the electric guitar in 1968 and played his first concert later that same year at the age of 13 as lead guitarist for the band Blue Infinity. His early influences were The Beatles, The Cream with Eric Clapton and Jimi Hendrix. In the following years Uli played in a number of bands in Hanover while also studying classical guitar as well as the piano. His influences at that time were Andrés Segovia and Julian Bream, but also Flamenco guitarists like Manitas de Plata and the great violinist Yehudi Menuhin.

Uli was the first electric guitarist who had the vision and ability to significantly introduce a whole armoury of classical techniques towards the electric guitar, thus vastly expanding the hitherto somewhat limited technical vocabulary available on the guitar. Uli was the first guitar player in rock music who brought genuine classical know-how and virtuoso dexterity towards the instrument, a fact which has gained him the title of “father of neo-classical”.   http://www.ulijonroth.com/

Ben Caplan, with Geoff Berner
Ben Caplan is a songwriter, performer and entertainer. Ben explores themes of immigration, loss, darkness, love, sex, and God. Caplan is touring with a fresh batch of songs which were originally composed and compiled for a new musical play called Old Stock: A Refugee Love Story. The award winning play had its international debut at the Edinburgh Fringe Festival where it won top festival honours. The play has toured internationally including a seven-week run Off Broadway where it picked up a New York Times Critic's Pick, and six Drama Desk Award nominations.

Caplan has been hitting the road to play concerts across Europe, Australia, and North America with a new lineup of musicians. The music from his theatre production has been turned into Caplan's third studio album.

Throwback Thursdays featuring The Duhks and Off The Wagon
World-beat to blues, urban-pop to old-timey, with wild-eyed invention, haunting traditionalism, and spine-rattling groove. GRAMMY and JUNO award winners, seeing The Duhks live is a spiritual experience. A syncopated bluesy banjo number seamlessly follows a Cajun two-step; an old-time jaunt nestles comfortably next to a gospel performance.

BULLRIDER releases our debut album 'Hidden Gems And The Love Of Another'.
We are honoured to have @Amadians, @Liabilities, and @ExØmerta sharing the stage.
A ticket guarantees good music, good company and #HiddenGemsAndTheLoveOfAnother.
We're looking forward to delivering this album to everyone in attendance. Let's dance!

In the short time since they released their debut record, ‘Sore,’ Dilly Dally toured the world, only to nearly collapse and call it quits forever. Rising from the ashes with more power and conviction, the Toronto rockers’ new album is titled ‘Heaven,’ and it’s a fierce, fiery ode to optimism. Frontwoman Katie Monks describes the songs as coping mechanisms, a declaration of faith in the power of music and a burning reminder that we need not wait until the afterlife for things to get better.

Monks and guitarist Liz Ball fleshed out the lineup with bassist Jimmy Tony and drummer Benjamin Reinhartz and floored critics on both sides of the Atlantic.

Chastity is a world of its own from the mind of Brandon Williams. Chastity’s songs are charged with the ethos of archetypal youth on the fringe. It is an artifact of youth culture constantly working to form community, bridging isolation with collectivity. Visuals play a meaningful role with Williams using his penchant for crafting consistently sharp, challenging imagery to personalize the narratives running throughout all of Chastity’s work.

The GOAT, the Manitoba Museum’s inaugural Artisan Market will feature a variety of local artisans and be filled with fun activities for the whole family.
Questions - ontact Rachel Maes at 204-988-0696 or rmaes@manitobamuseum.ca

Makers Market - Hosted by Etsy Sellers of Manitoba
A market of talented local, vintage, and handmade Etsy shops with FREE ADMISSION!
Two and a half floors of sellers to shop from! Elevators and ramps make this market accessible and stroller friendly. On site cafe and paid parkade parking.

Join Crafted by Me at The St. Norbert Popup Market!
Discover and Explore Local Talent!
-HANDMADE Items by MANITOBA Artisans
-SUPPORT Artisans in the Community
-Beverage & Snack Bar and More!
For more info or to showcasing your Talent, please email kellys@craftedbyme.ca
www.craftedbyme.ca

Philippe Larouche is a dancer, choreographer and repetiteur. He danced on stages in China and across Canada and the US. He performed the pas-de-six in Giselle, the Russian Dance in Nutcracker and joined the corps-de -ballet in Romeo and Juliet and Swan Lake.

Jera Wolfe, of Metis heritage, studied at the National Ballet of Canada, Arts Umbrella, and Canada’s Royal Winnipeg Ballet School. He is an Associate Artist with Red Sky Performance, and choreographed Reminiscence for the RWB School’s annual Professional Division showcase: Spotlight in May 2017.

Master-Instructor Level Integrated Energy Therapy Workshop · Hosted by Kristel Kernaghan
“Master” refers to the mastery of the IET energy that you will receive in this class. "Instructor" refers to your ability to teach IET classes.

Mediumship Development Group · For those who have taken the Basic Mediumship
Students can practice in a safe and nurturing environment, and be personally coached and mentored by Kristel Kernaghan. 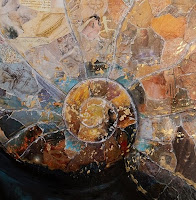 What does it mean to be human?  And how does humanity as a whole impact the earth, its other inhabitants and the environment?  Human hands can change everything.  The question remains, will our final impact on the planet be for better or worse?

Glimpses of Humanity is a photography and mixed media art exhibit that explores the human aspect through paint, paper and photograph.  You will find signs of the human element in obvious ways – faces, hands, roads; as well as through more subtle clues of humanity’s presence – like an expansive view of nature reminding us of our role in keeping the earth.

Lorena Ferguson is a mixed media artist who creates with whimsy and meaning. Her unique art pieces are filled with pieces of history, language, music and things that stir the spirit and imagination.

Jorja Loewen is a professional photographer with a passion for bringing out the beauty in everyone and everything.

Art in Bloom - Every second year, the galleries blossom with a feast for the senses. Welcome spring with inventive floral designs interpreting artworks from the WAG collection.

KINKY BOOTS is Broadway’s huge-hearted, high-heeled hit! With songs by Grammy® and Tony® winning pop icon Cyndi Lauper, this joyous musical celebration is about the friendships we discover, and the belief that you can change the world when you change your mind. Inspired by true events, KINKY BOOTS takes you from a gentlemen’s shoe factory in Northampton to the glamorous catwalks of Milan.

Charlie Price is struggling to live up to his father’s expectations and continue the family business. With the factory’s future hanging in the balance, help arrives in the unlikely but spectacular form of Lola, a fabulous performer in need of some sturdy new stilettos.